Pay upon Check-in
"Boasting historical landmarks such as the National Shrine of Saint Joseph, Mandaue Presidencia, and Bantayan sa Hari, visitors will also find the modern Cebu International Convention Center here. When not visiting landmarks, treat yourself to a bit of retail therapy and a meal at one of the many malls in the area."

Other Accommodations in Mandaue City

Other star hotels in Mandaue City

Other hotels in Mandaue City

S-36 San Jose Village, Umapad, Umapad, Mandaue City, Cebu, Philippines, 6014
With a stay at Residenz Guesthouse in Mandaue, you'll be convenient to Marcelo Fernan Bridge and St. James Amusement Park. This guesthouse is within close proximity of J Centre Mall and Our Lady of the Rule Church.

M.C. Briones Street, National Highway, Mandaue City, Cebu, Philippines, 6014
With a stay at Metro Park Hotel Mandaue in Mandaue, you'll be near the airport, within a 15-minute drive of SM City Cebu and J Centre Mall. This hotel is 2.9 mi (4.7 km) from Ayala Center and 3.7 mi (6 km) from Fuente Osmena Circle.

Lopez Jaena Street, Subangdaku, Tipolo, Mandaue City, Cebu, Philippines, 6014
A stay at Leope Hotel places you in the heart of Mandaue, a 7-minute drive from SM City Cebu and 12 minutes from Ayala Center. This hotel is 2.4 mi (3.8 km) from Waterfront Cebu City Casino and 2.7 mi (4.3 km) from Heritage of Cebu Monument.

8.5
Impressive
1,005 reviews from hotels in Mandaue City with aggregated rating of 8.5/10.
Review from various users that have stayed in Mandaue City will help you to choose the perfext hotel easily!
ML
Mark L. D.
Big Hotel - MULTI-USE HOTEL

8.5
/ 10
8.5
31 May 2022
I like how the hotel maintained their safety protocols. The idea of a stationed security officer by the elevator lobby who politely asks where an incoming visitor is heading made me feel secure. The room was well kept. The buffet area although can be crowded especially on peak hours, did not make me feel like it is crowded especially in the food stations. Good job Bai Hotel Team!
LY
Lloyd Y.
Big Hotel Suites

9.1
/ 10
9.1
15 Dec 2020
The room that is great for 3-4 persons. I love this place hence it seems that they have been impacted by Covid as there is not much of a tourist and no longer have a buffet breakfast for everyone’s safety. Overall, it is still a great hotel for me.
Lovella E.
Maayo Hotel

What are the best areas to visit in Mandaue City?

What are the most popular landmarks in Mandaue City?

How many hotels are listed in Mandaue City?

Currently, there are around 54 hotels that you can book in Mandaue City

Other star hotels in Mandaue City

Other hotels in Mandaue City 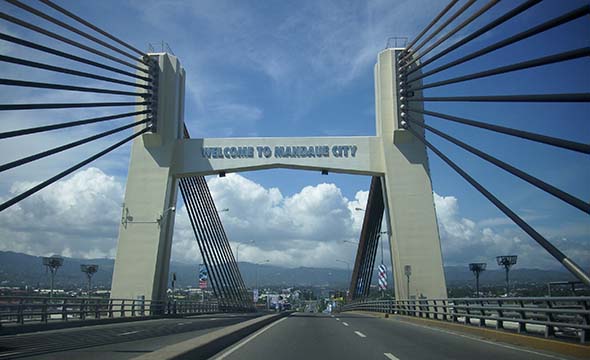 Nestled between the cities of Cebu and Consolacion, Mandaue City is one of the 13 cities and municipalities that make up Metropolitan Cebu. As part of this prosperous urban agglomeration in Central Visayas, Mandaue enjoys the status of being one of the most visited destinations in the region.

Mandaue is directly across Mactan Island, where Lapu-Lapu City and the Mactan-Cebu International Airport are located. Home to more than 360,000 people, it is the third most populous city in Metro Cebu.

Mandaue is famous for the natural attractions surrounding it, its historical sites, and its exciting cultural and religious festivals. As part of the Cebu area, it is also a place where one can enjoy some of the most well-known Visayan culinary favorites.

The Mactan-Cebu International Airport is one of the most important gateways in the Philippines. Thus, it caters to direct flights from many Asian cities, including Manila, Singapore, Hong Kong, Kuala Lumpur, Taipei, Seoul, Doha, Dubai, Busan, and Xiamen. In addition, the airport also services flights coming in from numerous Philippine locations.

The port of adjacent Cebu City is the busiest in the Philippines, accommodating as many as 16 million passengers every year. Mandaue visitors from faraway like places Manila, Batangas, Davao, Zamboanga, and Cagayan de Oro can take any one of the large passenger ships that travel to Cebu. Smaller boats and ferries also carry passengers from nearby islands like Bohol.

The easiest way to travel around Mandaue City is through the taxicabs plying the streets of Metro Cebu. Jeepneys are also available, but the routes can be pretty challenging for travelers to decipher. When in doubt, ask help from one of the locals. For travels involving shorter distances, consider hiring a tricycle.

Mandaue is connected to Mactan Island via the Osmeña Bridge and the Marcelo Fernan Bridge, two photogenic bridges that also provide great views of the two islands and the surrounding waters. 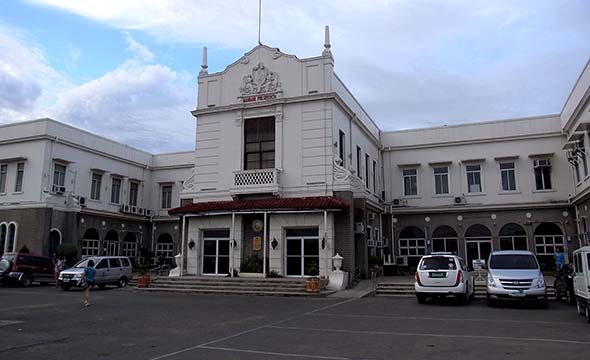 Other points of interest include the National Shrine of St. Joseph, a church which was first constructed in 1601, as well as the Neo-Grec Mandaue Presidencia, a beautiful Commonwealth-era edifice built in 1937 that now serves as Mandaue’s City Hall.

Mandaue City itself might not have a lot by way of tourist attractions, but its residents do celebrate colorful fiestas that really make the city worth visiting. The most prominent of these is the annual Translacion, a parade in which the images of the Señor Santo Niño (Holy Child Jesus) and the Our Lady of Guadalupe are made to meet at the Shrine of Saint Joseph as a way of honoring the Holy Family. The ritual transfer of the statues happens just a few days before the grand spectacle of Sinulog Festival, which takes place in the month of January. The parade includes a fluvial procession down the Mactan Channel in which scores of decorated catamarans or bancas participate. 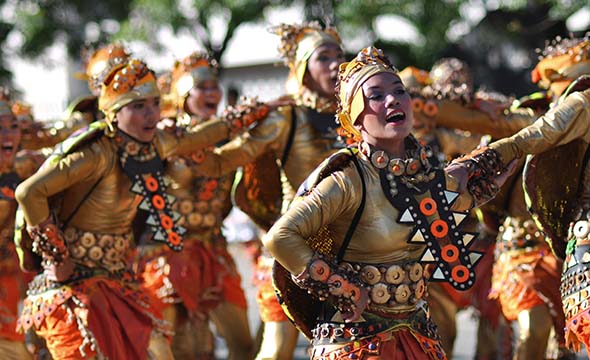 Other festivals include the Kabayo Festival, en equine fiesta held every February; the Mandaue Fiesta, a festival held every May to honor St. Joseph; and the Pasigarbo sa Sugbo, a cultural festival showcasing Cebuano heritage that takes place every year in Mandaue’s Cebu International Convention Center. During the Christmas season, a festival called Pasko sa Mandaue is also held. During the celebration, residents take to the streets to parade their beautiful parol and belen craft pieces.

Mandaue is known for its rich culinary heritage. Among the most famous food items offered in the city are Visayan favorites like sugba (grilled meat or seafood), lechon, and inasal. The city is also often billed as the best place to eat a bibingka in Cebu Island.

As Cebu is a cosmopolitan place, it is also understandable that Mandaue has come to adopt the gastronomic traditions of many other cultures. To experience this, you can dine at Buffet 101 Restaurant on Mantawe Avenue, where you can enjoy a vast selection of international dishes. Nonki Japanese Restaurant on A.S. Fortuna Street, on the other hand, is one of the most well-known Japanese restos in town. If you are craving for Chinese food, then walk over to Tao Yuan Seafood Restaurant, which is located in the same complex. 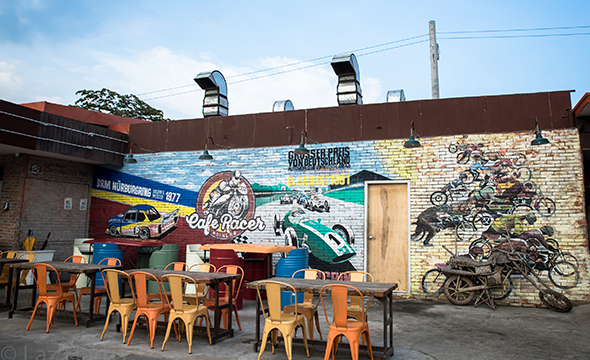 Mandaue is quite a happening place, offering numerous nightlife venues that are frequented by young locals and expats alike. One of the most popular nightclubs is Liv Super Club in Time Square, which attracts the house music and dance crowds. On the other hand, MO2 Restobar, located at the North Reclamation Area, offers billiards, karaoke, and dining facilities in addition to a nightclub. 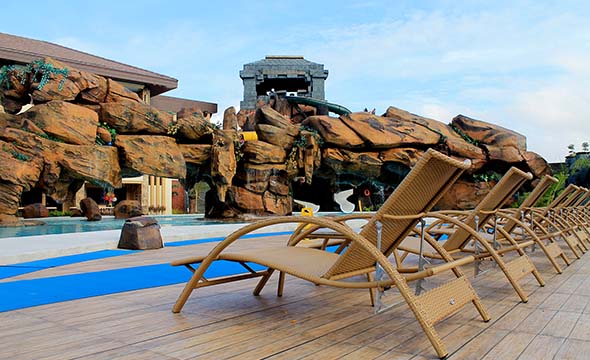 Mandaue has excellent hotel facilities where visitors can stay for a comfortable holiday in Cebu Island. Popular hotels include the Cebu Westown Lagoon (pictured above), Alpa City Suites, BIG Hotels, and the Copenhagen East Residences, which are known for their modern amenities. There are also a variety of backpacker hostels and bed and breakfast accommodations in the city.

Other Popular Hotels in Mandaue City