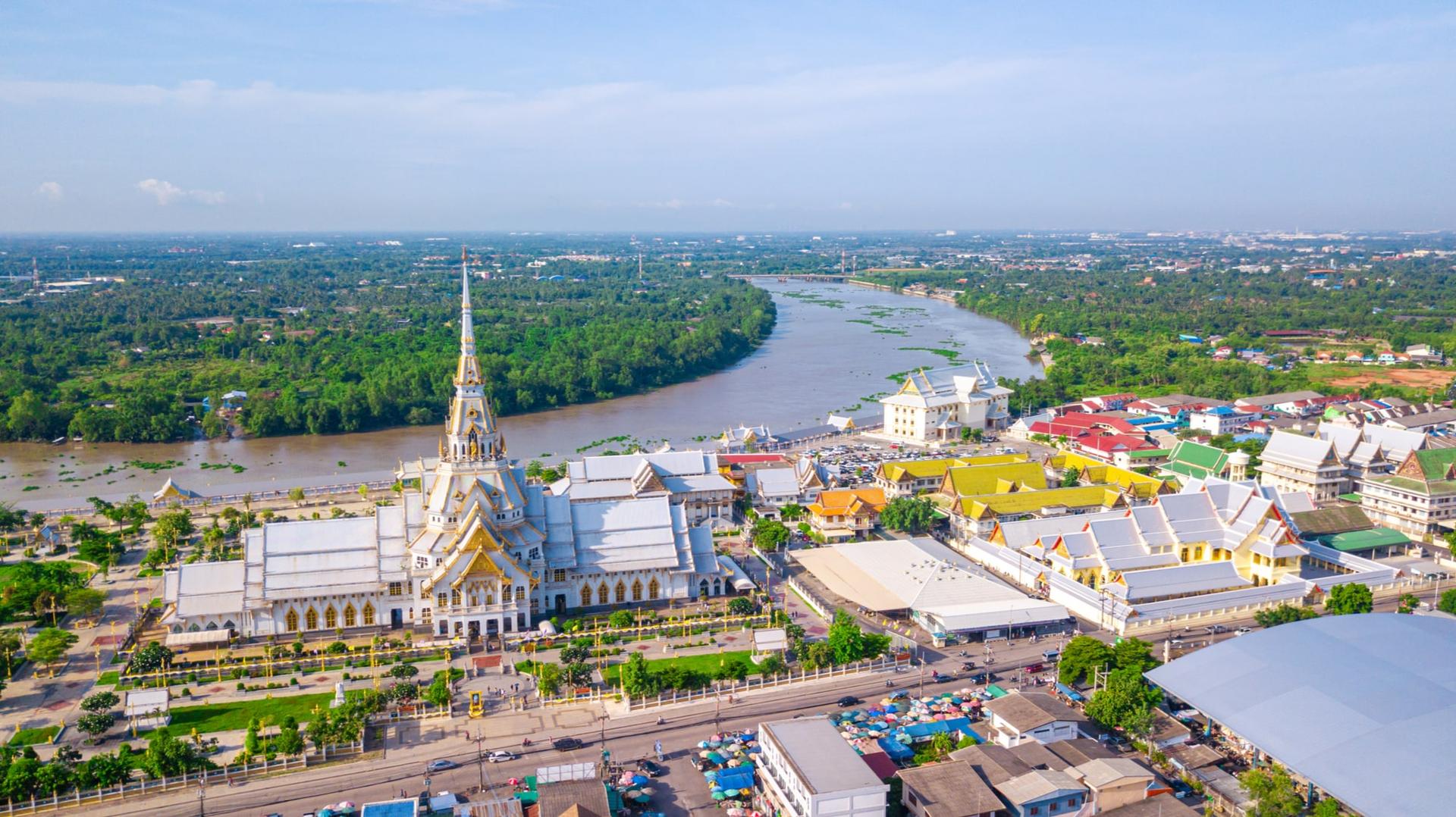 Other Accommodations in Cha-am District

Other star hotels in Cha-am District

Other hotels in Cha-am District

The Beach Cha Am Guest House

The Beach Cha Am Residence

CHA AM MY HOUSE

9.7
/ 10
9.7
29 Mar 2020
Comfy and clean. Cha-am beach is in front of the hotel, just cross the road. Breakfast is quite good. Swimming pool is on second-floor. Overall is good and value for money.
LM
Lydia M. B.
The Beach Cha Am Guest House

What are the best areas to visit in Cha-am District?

The best areas to visit in Cha-am District are
Cha-am
,
Huai Sai Nuea

What are the most popular landmarks in Cha-am District?

How many hotels are listed in Cha-am District?

Currently, there are around 279 hotels that you can book in Cha-am District

Other star hotels in Cha-am District

Other hotels in Cha-am District

Cha-am is a resort town in the Phetchaburi Province located about 2 hours south of Thailand’s capital of Bangkok. Cha-am is much like its more lively neighbor, Hua Hin but much less populated, and more relaxed. Located about 20km from Hua Hin, Cha-am boasts what no other city in Thailand can: the longest shoreline stretch in Thailand at Cha-am Beach. Cha-am is especially popular with families as well as couples and friends looking for a serene and quiet beach getaway for a weekend away from Bangkok.

Cha-am tends to be more on the budget friendly spectrum compared to nearby Hua Hin, which is frequented by the royal family as well as hi-so Thais. Cha-am is more for working class families and Bangkok students. On weekends and holidays, neon-painted buses ramp up the sound system and deliver groups for enjoy the charms of Cha-am. It’s a Thai-style beach party with eating and drinking marathons with festive music in the background. Banana boats and their passengers entertain those on shore.

Cha-am is named for a much beloved King of Thailand, King Ayutthaya. The word “cha-am” means “the saddle” which has historical significance. The loyal soldiers of Thailand wanted to please their king, so they would stop in small fishing villages such as modern day Cha-am to take a break and polish their saddles to be absolutely immaculate. Through this simple gesture, the soldiers were paying extra homage to their king.

Cha-am was established administratively in 1897 as part of Na Yang district, which was amended to become Nong Chok in 1914.

Hua Hin is just a 20 or 30 minute drive from Cha-am, which sees much higher prices and a higher number of tourists. Hua Hin is famous for its seafood and the fact that the Royal Family has a vacation home there.

Bangkok is just a short 2 hour drive away, so if you’re getting a bit bored of the slow beach life, head over to Bangkok and get a taste of the city life for a few days. There are plenty of vans and buses that will take you there.

There is a fishing village where there are shops and fishmongers to see. This is referred to by locals as the “Fishing Pier.” There are numerous options for seafood such as crab, squid, and shrimp. Phetkasem Road is another popular area with access to tourist activities such as Wat Cha-am and Khao Nang Phanturat Forest Park.

Cha-am has something for everyone, from 5 star luxury resorts to romantic getaway villas to backpacker style accommodations.  Here are some of our top recommendations

Boasting an unbeatable location of only .3km from Cha-am beach, Golden Beach Cha-am is a top choice when it comes to accommodations in Cha-am area. There is WiFi, a pool, a restaurant that serves breakfast, lunch and dinner, a conference room, a pool, a bar, air conditioning and even a garden. This beautiful, relaxing, simple hotel has all the charm for a fraction of the price.

A fantastic place for a romantic weekend getaway, Grand Pacific Sovereign Resort and Spa has it all. Only a few km from Cha-am beach, there are luxury amenities such as 24 hour room service, a coffee shop, WiFi, cable TV, access to a supermarket, laundry, fitness center, steam room, multiple swimming pools, and above all, a friendly and helpful staff.

Located in a convenient part of town, Cher Resort is only 9km from Hua Hin Airport. There is airport service with a surcharge, a bar, restaurant, pool, access to a private beach nearby, bicycle rentals, and even babysitting with an additional fee. Cher Resort is geared towards families who want to relax and enjoy all the charms of Cha-am.

A simple but charming and homey type of accommodation, this hotel is only 1km from Cha-am beach. It allows pets, has a laundry service, a restaurant, bar, TV and a multilingual staff. There’s also a coffee shop and a family room.

Renowned for their fantastic food, service, and staff, the Cera Resort Chaam is middle class luxury at its best. Equipped with everything one needs on vacation with a few subtle touches of class, this strategically placed hotel will help you find the ultimate relaxation in Cha-am.

Cha-am is quite close to Hua Hin

Airport
, but the easiest way to get there will be from Bangkok. Flights in and out of Hua Hin are often delayed and usually quite expensive and don’t operate nearly as much as
flights
from Bangkok do. Here’s our recommendation on how to get to Cha-am from Bangkok.

There are two southbound trains from Hualamphong Station in Bangkok, and one from Bang Sue Junction which stops at the Cha-am train station.

You can hail a taxi from BKK and have it take you to Hualamphong Station.

Public Transportation - take the Airport Express Link to Phaya Thai BTS. Take the BTS to Asok, then transfer to the MRT. Take the MRT to Hua Lamphong (end of the line) and that’s where the train station is.

Buses depart regularly from Bangkok to Cha-am. The hours are generally 05:00 to 22:00, and there are as many as 10 departures a day. The bus departs from Sai Tai Bus Terminal (southern bus terminal) and cost 150 THB and take about 3 hours. VIP buses will leave at the time scheduled, but regular buses will wait for enough passengers before departing.

Minivans depart from Victory Monument BTS. Take exit no. 2 to find the minivans, you might have to go up to the ticket stand and ask which line to wait in. Cost is 160 THB and minivans usually fit 13 passengers. It’s best to get into the van early, as there are definitely seats that are more desirable than others. The ones in the back are a bit higher than the rest of the seats, so those with shorter legs may not be able to touch the floor. However, the space is also smaller so even those with longer legs will likely be uncomfortable.

Minivans depart as early as 5:00 until 20:00. Large suitcases may be charged an extra seat.

You can rent a car to drive to Cha-am. Rates will vary based on season, type of car, and availability. The drive is about 2-3 hours depending on traffic.

These are several ways to get around Cha-am:

Bicycle can be rented from guesthouses and hotels. Tandems and bikes are available for THB 30 per hour.

You’ll rarely get a metered taxi in Cha-am, so you’ll have to negotiate the fare before accepting the ride. Motorbike taxis are more convenient if you don’t have luggage, they’ll take you most places around town and the beach for 20 THB.

Renting a motorbike is one of the best ways to explore Cha-am. You can rent them for 150-300 THB per day. Be sure to inspect the motorbike prior to accepting the rental. Most motorbike companies will require you to hand over your passport. Sometimes they’ll accept another form of ID or a cash deposit.

Buses in Cha-am only run along Phetkasem road, where most people can hop on and hop off alongside the stops in the road. There are two types of buses:

Constructed in 1923 under King Rama VI’s reign, this was the romantic summer house for his majesty. Over the years, it’s become more of a tourist attraction. Clothes appropriate for a temple are required, with shoulders and knees covered.

Opening hours: 9am to 4pm, everyday except Wednesday

Entrance fee: 30 baht for both Thais and foreigners.

About an hour’s drive from Cha-am, this is a true piece of serenity. Monkeys, birds, waterfalls, hikes and lush jungle greenery await you at Kaeng Krachen National Park.

Opening hours: sunrise to 6pm, unless you have prior approval to camp.

A great half day trip for the whole family. A multitude of animals can be fed here, including bunnies, goats, sheep, and more! Animals are mostly in open spaces, so there’s no sense of a zoo.

Opening hours: 9am to 7pm

Located near Cha-am is more fun for the whole family at Santorini Water Fantasy. Attractions such as the Crazy River, the Drop Screamer (skydiving but in water), and the signature King Cobra slide will have the whole family screaming with joy. Staff are known to be efficient, friendly, and up to the task of making sure you and your loved ones are having fun safely.

Opening hours: 10am to 630pm, but will vary slightly with the season.

Other Popular Hotels in Cha-am District