Your pass to explore various parts of Japan and experience riding the Shinkansen at 320 km/h.

What is JR Pass?

Japan Rail Pass, or more commonly known as the JR Pass, is the most effective way for tourists to explore Japan. If you plan to visit various areas in Japan, then buying a Japan Train Pass can save a lot of your travel budget.

Provided by the Japan Railways Group (JR Group), the Japan Train Pass offers two train classes, which are the regular Ordinary Car and the premium Green Car. But aside from trains, the JR Pass can also be used to ride other JR Group’s transportation modes, such as airport transfers, buses, ferries, and even bicycles.

Whether you want to explore all parts of Japan, or just really get to know an area, we’ll find a pass to suit your needs.

Open Japan Trains on your Traveloka App. Start your search by filling in the areas/places you’ll be visiting in Japan.

You will see all of the available passes for your destination. Find more info about the pass by tapping one of the pass selections.

Learn more about the pass usage, coverage area, and services. Then, select one that best suits your needs.

Some pass offers both Ordinary Car (Regular) and Green Car (Premium). Select your preferred class, then add your travelers.

Fill in your booking details and select how you want the Exchange Order to be delivered. Then, complete your payment.

Get your Exchange Order

After your payment is confirmed, you will receive your Traveloka voucher. Meanwhile, your Exchange Order will be delivered via email or courier, or you can pick it up by yourself. 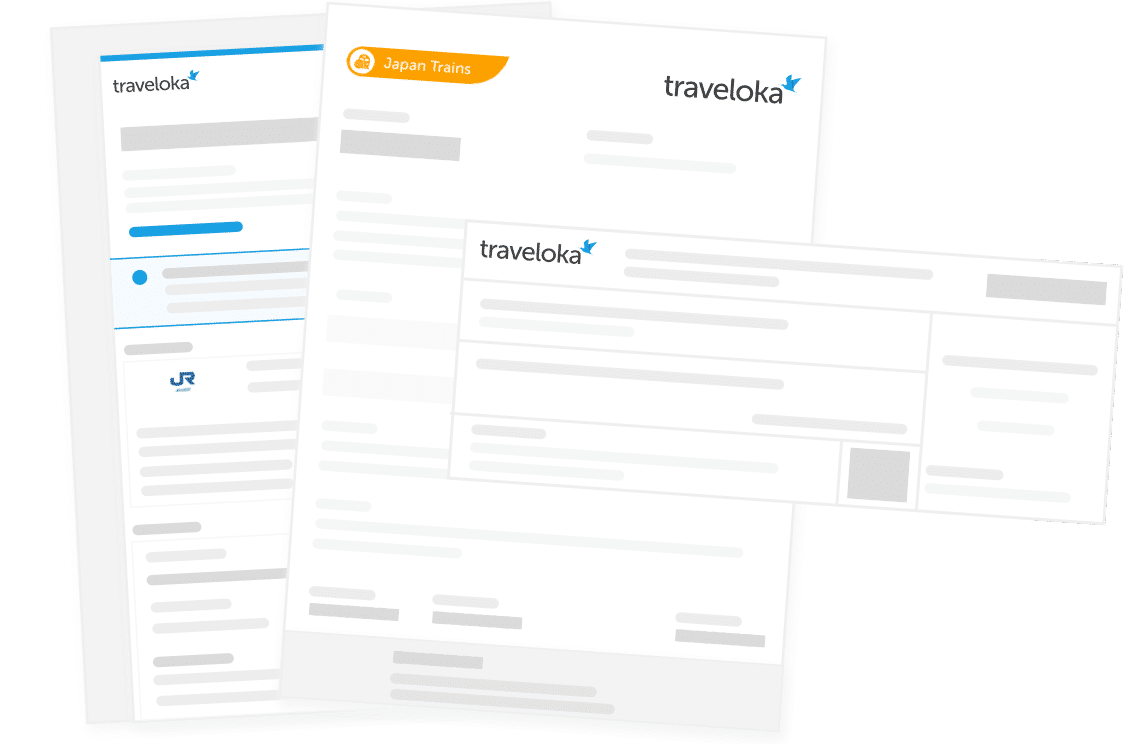 When you travel to Japan, make sure to bring your Exchange Order.

Ask for the Temporary Visitor stamp

Upon entering Japan, ask the immigration officer to apply the Temporary Visitor stamp on your passport.

Go to one of the JR offices

Go to any of the JR offices located in major airports and train stations (as listed here).

To get your JR Pass, show your Exchange Order and the Temporary Visitor stamp on your passport to the JR staff.

No matter how many times you have visited Japan, the Sakura country never seems to run out of attractions for tourists. From Hokkaido to Okinawa, Japan presents natural wealth and cultural uniqueness that display a different charm as the seasons change. Previously, the Tokyo Tower, Shinjuku, and Asakusa in Tokyo are known as the main attractions. But now, other destinations outside Tokyo, such as Shirakawa-go and Nara City, are starting to attract tourists.

Unfortunately, it seems that the transportation cost is a nightmare for some tourists visiting Japan. Even though the country is known for its developed and convenient transportation system, many people assume that transportation costs in Japan are more expensive than other tourist destinations such as South Korea. This often makes tourists think twice about visiting places outside big cities like Tokyo, Osaka, and Kyoto. Whereas in smaller cities, tourists can find more incredible natural and cultural wonders that’ll make their trip in Japan much more worthwhile.

For this reason, Japan provides Japan Rail Pass (JR Pass) for tourists so they can save on transportation costs when traveling around the country. Essentially, JR Pass is a pass ticket that allows tourists to get around Japan in accordance with their planned itinerary. Besides being a more efficient way to travel around the country, here are several things you should know if you are using JR Pass during your trip to Japan!

Plan Your Route with JR Pass

Before you buy a JR Pass, you should plan your travel plans carefully so you can choose the right JR Pass when traveling in Japan.

Unlike Indonesia, public transportation services in Japan, including trains and buses, are served by several private service providers. One of the biggest is the JR Company. The coverage served by the JR company itself is divided into six, depending on the service area. For example, if you want to visit the Kanto region such as Tokyo, Chiba, Saitama, Gunma or Ibaraki, you can just use the JR East Pass. Whereas if you want to travel around the Kansai area, you can use the Kansai Pass which serves routes such as Kansai Airport (KIX), several tourist attractions in Kyoto-Osaka such as Arashiyama and Fushimi Inari Taisha, as well as Kobe and Nara prefectures.

Not only that, you can also use JR Pass to go across regions. One of the most popular is the Tokyo – Osaka route. You can use the Tokyo-Osaka Hokuriku Arch Pass which also passes through major cities such as Nagano, Kanazawa, and Toyama.

By having the right JR Pass, you can save money and time. This means you can visit more destinations, in a cost-effective way.

With a JR Pass, you can use all types of trains operated by the JR Company, including Shinkansen trains, Express Limited trains, Narita Express airport trains, fast trains, and local trains.

Not only trains, but you can also use JR Pass for other transportation options such as the Monorail to and from Haneda Airport, JR Ferry if you intend to go to Miyajima Island from Hiroshima, as well as several local buses operated by the JR Company. Some JR buses you can use include buses around Hiroshima, local buses in Sapporo, Kyushu, and many more. With JR Pass, you can also take non-JR trains on certain routes such as the Aomori Railway, Ishikawa Railway, and Ainokaze Toyama Railway.

In general, you can use JR Pass on all lines owned by the JR Company. However, please note that special trains such as the sleeper train, as well as the Nozomi and Mizuho Shinkansens are not included in the transportation served by the JR Pass.

When you have bought the JR Pass, you will get an Exchange Order. Save this document as the proof of your purchase. Upon arrival in Japan, make sure that the immigration officer stamp your passport with a 'temporary visitor' stamp. Then, head over to the many JR Pass offices to redeem your Exchange Order with the JR Pass.

Once you have received your pass, go through a manned ticket gate and show your JR Pass to the staff. At some stations, you may need to present identification. Then, make your way to the platform to board the train.

Other Conveniences of Having a JR Pass

JR Pass are available in several usage durations, starting from 7 days, 14 days, to 21 days. There are three seating options, namely Ordinary Car, Green Car, and Gran Car. The Green Car has more space than the Ordinary Car, while the Gran Car offers the most exclusive seat option compared to the other two.

With JR Pass, you can also book the seat you want for free, which is available one month before the trip. If you are already in Japan, you can come to the JR office and show your JR Pass. State your destination and schedule, and the officer will help you order a seat.

In addition to free seats, you can also get a discount if you plan to stay at a hotel managed by JR Company.

Although you can buy JR Pass at Narita, Haneda, and Kansai airports, as well as at Tokyo, Nagoya, Osaka, Yokohama, Hiroshima and Hakata stations, it would be much easier if you already bought your JR Pass before leaving for Japan. By doing so, you would only need to exchange it when you arrive in Japan. In addition, you also don’t need to queue and spend time looking for JR Pass sales locations when you arrive in Japan.

Fortunately, now you can buy a JR Pass through Traveloka App, to complete your travel plans in Japan. Not only can you buy the JR Pass easily, Traveloka can also help you find the right pass for your itinerary. Just enter the places you will be visiting in Japan, and Traveloka will find the pass that covers those destinations. So what are you waiting for? Get your JR Pass with special price on Traveloka now to save money on your next trip to Japan! 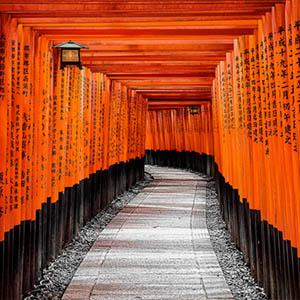 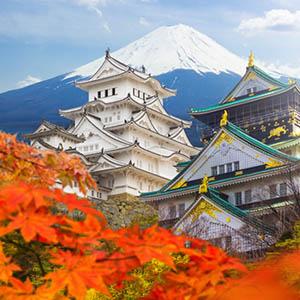 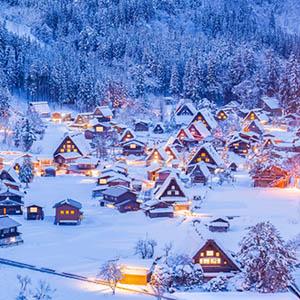