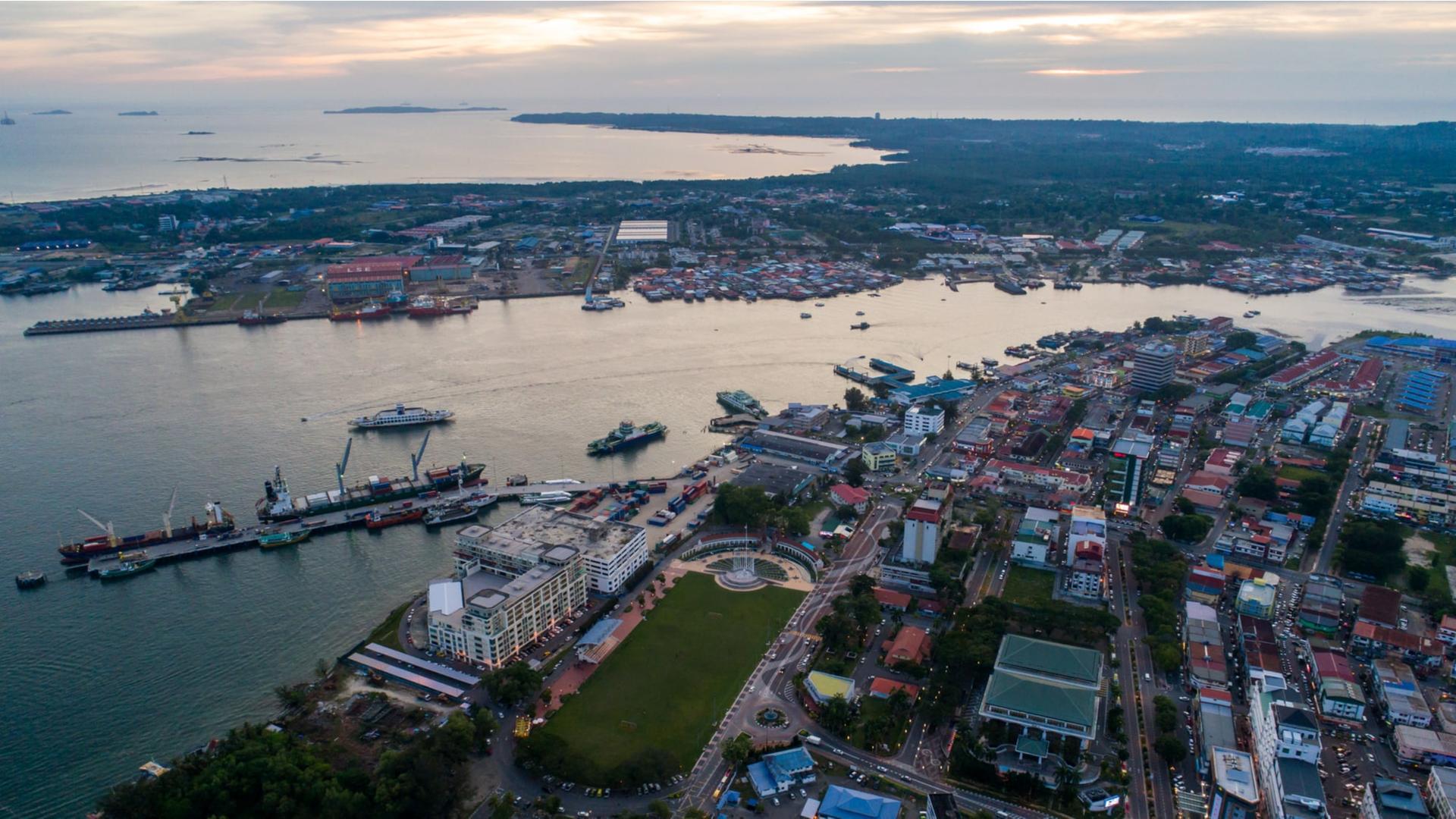 Hotels near The Chimney

Pay upon Check-in
The Chimney is a museum in Kubong, Labuan, Malaysia. The museum details the history of Kubong when coal mining was at its peak under the administration of the British North Borneo Chartered Company. The structure was built in 106 feet high with a stack of 23000 pieces red bricks that were imported from England. Don’t forget to visit The Chimney hotel whenever you get here.

Best hotels near The Chimney

Labuan Main Town, Labuan
With a stay at AZ Hotel & Serviced Apartments, you'll be centrally located in Labuan, a 6-minute walk from An'Nur Jamek Mosque and 12 minutes by foot from Financial Park. This hotel is 1.2 mi (1.9 km) from Labuan International Sea Sport Complex and 1.6 mi (2.6 km) from Labuan Golf Club.

Labuan Main Town, Labuan
With a stay at Avida Hotel in Labuan, you'll be within a 10-minute walk of Labuan Museum and An'Nur Jamek Mosque. This hotel is 0.7 mi (1.2 km) from Financial Park and 0.9 mi (1.5 km) from Labuan International Sea Sport Complex.
See Prices
See Prices

Labuan Main Town, Labuan
A stay at KL Hotel places you in the heart of Labuan, within a 15-minute walk of Labuan Museum and An'Nur Jamek Mosque. This hotel is 0.9 mi (1.5 km) from Financial Park and 1.2 mi (2 km) from Labuan International Sea Sport Complex.

Labuan Main Town, Labuan
With a stay at Transit Hotel in Labuan, you'll be within a 10-minute walk of Labuan Museum and An'Nur Jamek Mosque. This hotel is 0.7 mi (1.1 km) from Financial Park and 1 mi (1.6 km) from Labuan International Sea Sport Complex.

Labuan Main Town, Labuan
With a stay at One Hotel in Labuan, you'll be within a 5-minute drive of Labuan Museum and An'Nur Jamek Mosque. This hotel is 1 mi (1.6 km) from Financial Park and 1.6 mi (2.5 km) from Labuan International Sea Sport Complex.

Facts about The Chimney

Guest reviews in The Chimney

8.7
Impressive
1,152 reviews from hotels in The Chimney with aggregated rating of 8.7/10.
Review from various users that have stayed in The Chimney will help you to choose the perfext hotel easily!

6.9
/ 10
1 Jan 2023
I would rate a 5 stars if not because I found that my money in wallet was stolen. There was a house keeping that I did not request. Realised it only when I am back to my hometown.

Cadment A. N. Y. W.
This is a private profile
โรงแรม KL

Samsu A.
This is a private profile
Tiara Labuan Hotel

6.2
/ 10
24 Jul 2022
Front office staff not well train, Restaurant staff not prepare the table as per usual. No greeting upon arrival, Food serve not up to the expectation. Simple menu.

sabarudin h.
This is a private profile
Dorsett Grand Labuan

Kong c. f.
This is a private profile
Fratini's Hotel

Kok S. L.
This is a private profile
โรงแรมลาเซนดา

5.5
/ 10
23 Sep 2018
The stay and service quality were just not worth the price we paid. for RM200+ we could have gotten a better stay at other hotels in Labuan. and it was disappointing considering it is a relatively new hotel. the aircon was not cold. we mentioned it to the receptionist. two technicians were sent but it didn't make any difference. we woke up sweating. we didn't bother to ask for a change in rooms because it was only for 1 night. we will not go back to this hotel.

Most commonly asked questions in The Chimney

What are the best areas to visit near The Chimney?

If you are in The Chimney, you can also visit Labuan Main Town, Batu Manikar Town, Kerupang Town

What are the best hotels and most popular in The Chimney?

How many hotels are listed in The Chimney?

Currently, there are around 30 hotels that you can book in The Chimney

Located in 87000 Labuan, Labuan Federal Territory, The Chimney is standing high in Tanjung Kubong. The Chimney is said to be mysterious thus becoming one of the popular tourists attractions in Labuan. It was built in the 80’s and the function of it is remained unknown and mysterious. Usually, chimney functions to provide ventilation for smoke. However, this chimney is found without any traces of smoke that indicates that it works like any normal chimneys. Some locals say that it may be an unfinished mansion built in those days while some say that it may be a light house since it is built in a higher place. Until today, no one has discovered the main purpose of the chimney that makes it so mysterious.The structure was built in 106 feet high with a stack of 23000 pieces red bricks that were imported from England. There is also a museum named Chimney Museum situated near the chimney, that showcases lots of information related to it.

This famous shopping mall is located on Jalan Merdeka and it is the only shopping mall in Labuan. Since Labuan is a duty-free district, it is said to be a great place to shop where the items are all sold at cheaper prices compared to other places in the country. Among the famous items bought by the visitors are chocolate, perfumes, cigarettes and alcohol. Financial Park Shopping Mall has become the main attraction for all locals as well as foreign visitors.

Dorsett Grand is an international well-known hotel located at Jalan Merdeka,Financial Park, Labuan. It is a five stars hotel and has been receiving prestigious achievements such as "Best Business Hotel Brand Malaysia 2014" and "Luxury Business Hotel 2014". Situated nearby the airport makes it popular for both purposes; business and leisure. This hotel accommodates a total of 178 rooms, that come in four different categories. They are; Deluxe Room, Executive Room, Premier Suite and Royal Suite. The rooms are spacious and comfortable to be stayed. The guests are able to choose the room with either panoramic city view or sea view. The rate starts from RM292 per night.

Sited on Jalan Wawasan, Labuan, Billion Waterfront Hotel is a hotel managed by Billion Pavillion Sdn Bhd company. This hotel accommodates a total of 94 rooms that come in 6 different categories. They are; Deluxe Park View, Deluxe Pool View, Deluxe Sea View, Executive Suite, Junior Suite and Presidential Suite. The rate starts from RM242 per night at Traveloka.com. Every room is equipped with convenient amenities to ensure the guests to feel as in at home while away from home. Sited at the heart of Labuan city makes the guests able and easy to explore the city just by walking. The guests are also able to enjoy themselves at the hotel for the hotel offers various recreational opportunities.

Tiara Labuan is located on Jalan Tanjung Batu, very near to Labuan World War II Memorial. It also near, about 10 minutes driving to the airport. This hotel provides five different types of rooms, including suites, for the guests to select based on their needs. There are, Deluxe Room that is 144 square metres wide, One Bedroom Suite that covers about 182 square metres, Two bedroom Suite that has two bedrooms, Tiara Villa that is occupied with three bedrooms as well as a kitchen and Premier Suite that only has 1 bedroom. The rate is ranging from RM256 to RM748 per night. This four stars hotel provides the best facilities such as fitness centre, outdoor swimming pool, adequate car parking, WIFI and a lot more. Having a motto as ‘Home of Tropical Experience’, this hotel makes sure that the green landscape that surrounds its building is kept maintained and pleasing the eyes of the guests.

Other Popular Hotels in The Chimney