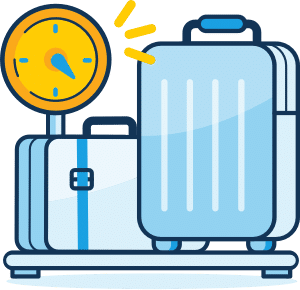 How do I select my preferred Firefly baggage allowance on Traveloka?

How do I select my preferred China Airlines seat on Traveloka?

How do I select my preferred China Airlines in-flight meal on Traveloka?

Whenever your flight is, make sure you don’t fly hungry. When you book at Traveloka, see the In-flight Meal section after choosing your flight and filling in your passenger details. Then, check out the menu and choose a meal or beverage for your flight.
Find Out More
Refund
Reschedule
Online Check-in
Baggage Wrap

How do I get a refund for a cancelled China Airlines flight on Traveloka?

How do I reschedule a China Airlines flight on Traveloka?

How do I check-in online for a China Airlines flight on Traveloka? 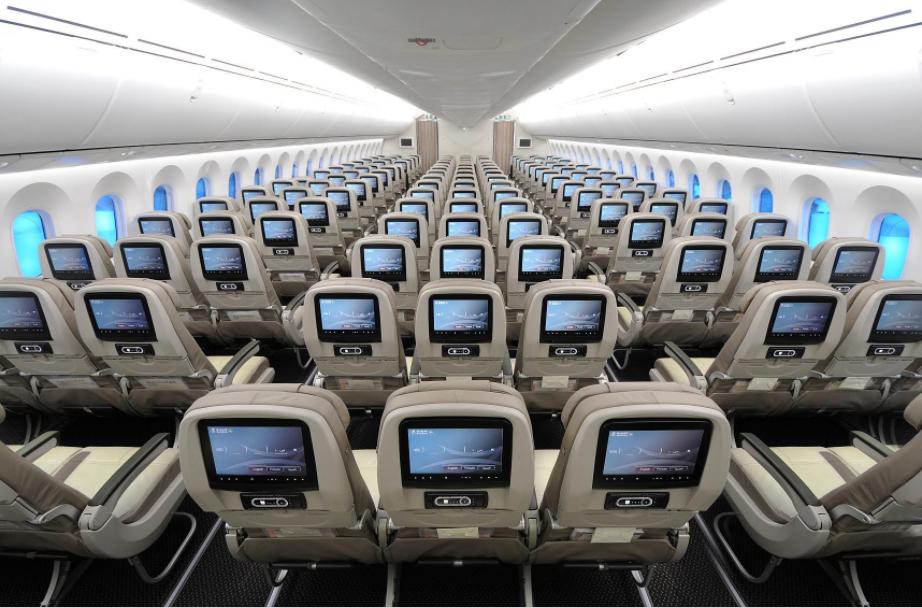 Saudi Arabian Airlines’ economy class, also known as the Guest Class, provides the most comfortable and spacious seats in the air. With seat pitches of 34 inches, it is more than the most other airlines allow in their economy classes. The seats feature an “Articulated Movement” feature, which enables automatic seat adaptation to body movement. Each seat is also equipped with a monitor that may reach up to 9 inches in selected aircraft. The in-flight entertainment system provides 24 stations of video-on-demand, 12 audio stations, and many video games to choose from. Overnight kits are given to all passengers for their personal care needs during the flight. 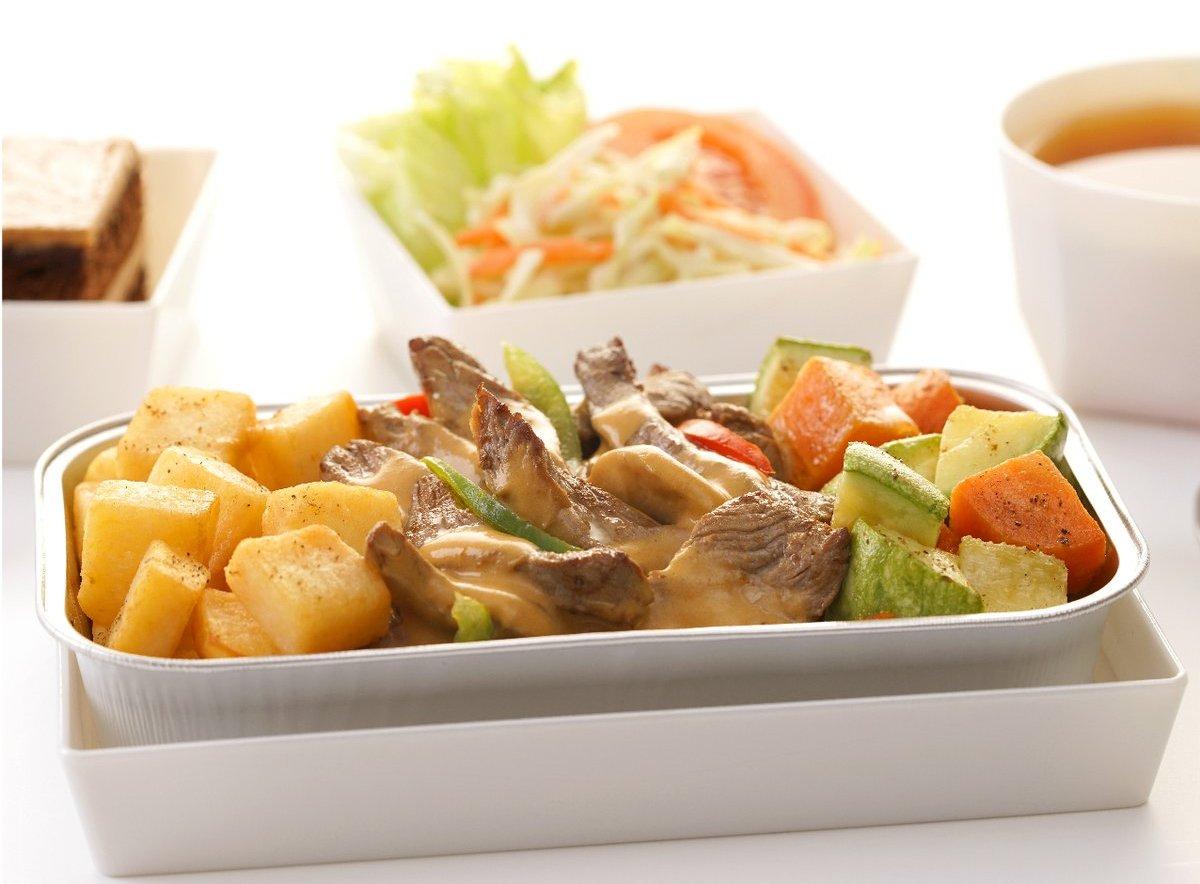 There is an in-flight meal service available in Guest Class. The menu varies from Arabic, Western, a dish from the destination country, to vegetarian meals. Before that, passengers can choose between three entrees that are provided with suitable accompaniments. Not to mention a selection of dessert, either ice cream or more traditional desserts plus tea or coffee, including espresso and cappuccino. 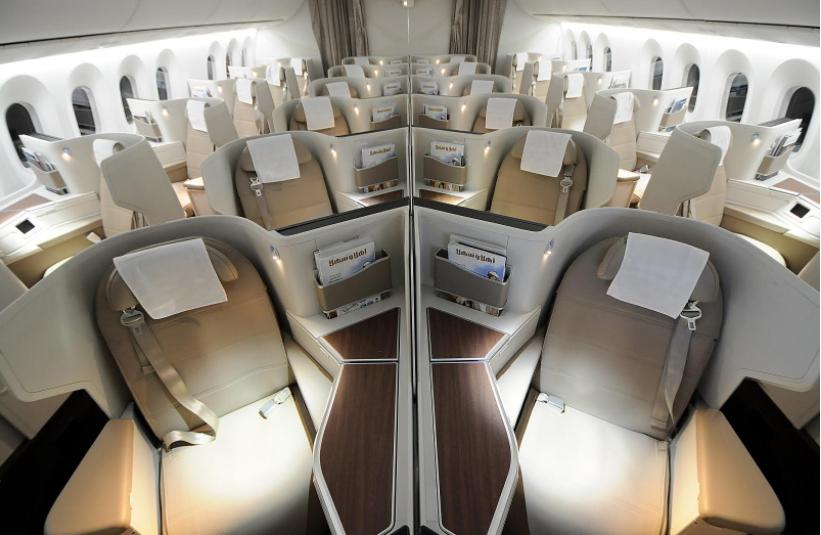 With generous recline and ample seat pitches to allow for optimum legroom, the Business Class seats deliver an efficient, friendly, and unobtrusive service that passengers need for personal space. The headrests are equipped with adjustable padded wings for maximum comfort. During the flight, Business Class passengers can enjoy an in-flight entertainment system through a 15-inches monitor, with a remote control that will provide them with complete flexibility. The entertainment system does not only contain movies and music but also stunning views through the forward and downward facing cameras, known as “pilot’s eye view”. 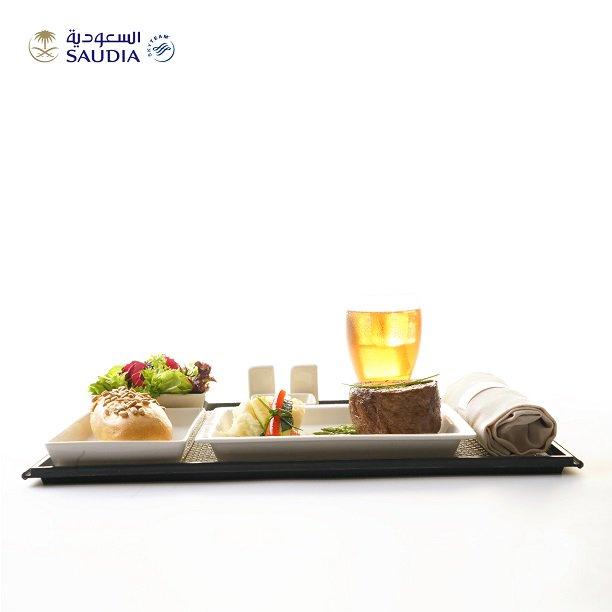 The international cuisine offered to the Business Class passengers is as diverse as the airline’s destinations, from Arabic, Western, to a dish from the destination country. Passengers can select from three choices of entrée, as well as will be served with traditional soup. In addition to that, there are also hot dessert or ice cream, and tea and coffee, including cappuccino and espresso, available onboard. 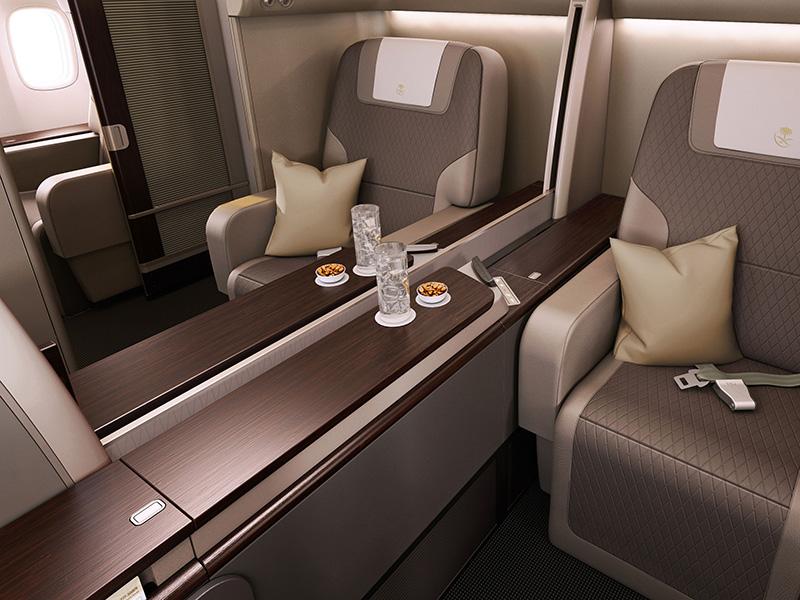 While the rest of the passengers board, the First Class passengers will be offered with a selection of fresh fruit juices. Shortly after takeoff, Saudi Arabian Airlines give a cardamom-flavored Arabic coffee and succulent dates. All seats are equipped with monitors that may reach up to 23 inches, with a remote control that will provide complete flexibility to the passengers while they are enjoying the in-flight entertainment system. On long haul flights, sleeping suits and overnight kits are given to First Class passengers so that they can change and be totally relaxed and comfortable during the flight. 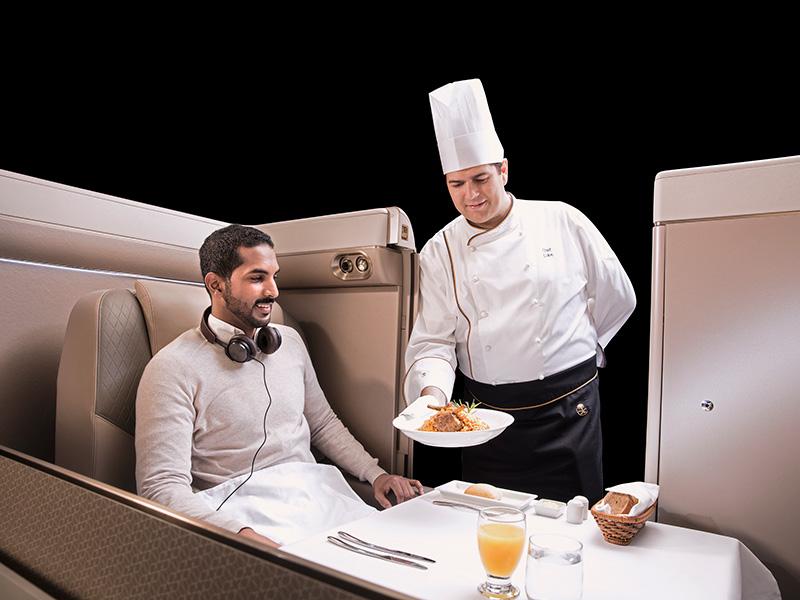 The Al-Faris Executive Meal service allows the First Class passengers to follow their own dining schedule. Whenever they are ready to have their meal, Al-Faris Executive Meal will serve it to them. The menu itself varies from Arabic, Western, to vegetarian cuisines. Passengers can choose between six entrees including hot choices and caviar. As a fitting finale, there is a choice of hot dessert or ice cream, tea, and coffee. 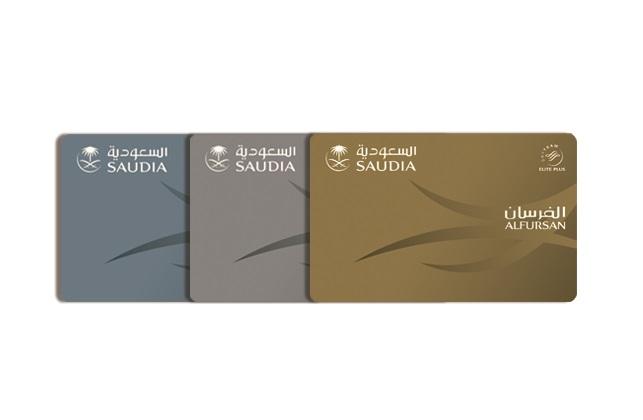 Saudi Arabian Airlines offers a frequent flyer program called Alfursan. Members of Alfursan can earn miles when they fly with Saudi Arabian Airlines or SkyTeam partners. Accumulates miles can be redeemed for a range of benefits and rewards that include free tickets and upgrades, global lounge access, additional baggage allowance, priority wait-listing, as well as a range of offers and promotions through Saudi Arabian Airlines’ exclusive partners. There are three tiers of Alfursan membership, which are Blue, Silver (SkyTeam Elite), and Gold (SkyTeam Elite Plus). As the member progresses through the tiers, they will get more exclusive benefits and rewards. 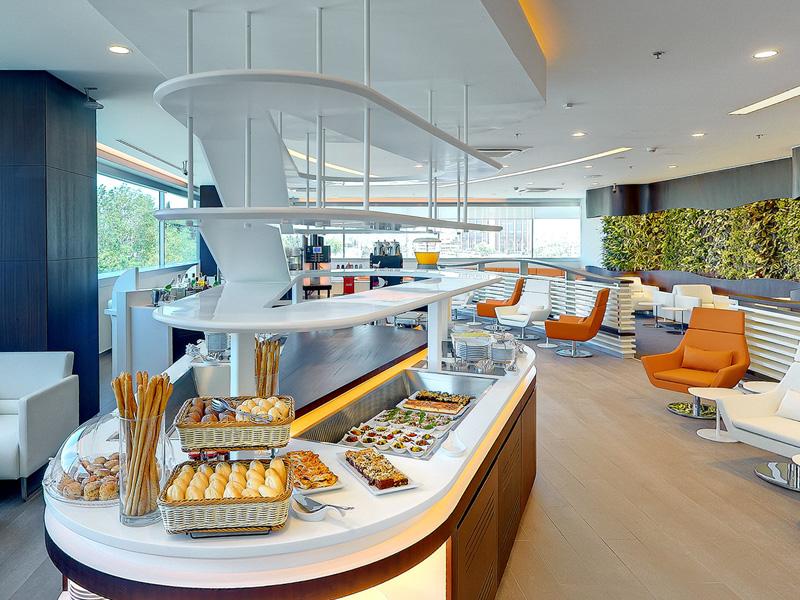 Saudi Arabian Airlines provides special lounges for its First and Business Class passengers, as well as Alfursan Gold and Silver members. There are many dedicated areas in this airport lounge, starting from food and beverage, relaxation area, kids room, business center and meeting room to a seating area. There are even shower facilities available so that the passengers can enjoy a refreshing shower while waiting for their next flight. Overall, this airport lounge is designed to make passengers feel relaxed and refreshed before they travel. 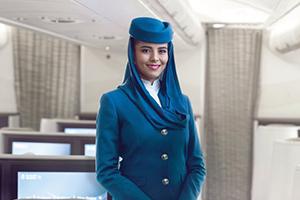 Please find the check-in time for all Saudi Arabian Airlines flights on the table below. Check-in time may vary if your flight is operated by a partner airline. Please check your e-ticket to ensure.

In general, refunds are permitted for personal reasons (self-cancellation, sickness, pregnancy, or death of a passenger), cancellation/rescheduling by the airline, force majeure, or double booking. However, different airlines have different policies regarding acceptable refund reasons. Please visit Saudi Arabian Airlines Refund Policy for a complete information on refund.

Saudi Arabian Airlines (IATA code: SV), also known as Saudia, is the national carrier airline of Saudi Arabia. Based in Jeddah, the airline’s main operational hub is located at King Abdulaziz International Airport. Using a fleet of 133 aircraft, Saudi Arabian Airlines operates domestic and international flights to more than 120 destinations in the Middle East, Africa, Asia, Europe, and North America. The airline also operated domestic and international charter flights, mostly during the Ramadan and the Hajj seasons. Founded in 1945, Saudi Arabian Airlines has gained a lot of international awards. Some of them are Best Fixed Networking Implementation Project of the Year 2012 from Network Innovation Awards 2012, CI050 Award for 2013, and Silver Plate from Royal Brunei Airlines for On Time Performance. The airline offers three different types of flight classes, which consist of Guest Class, Business Class, and First Class. Each class provides an in-flight entertainment system, but with different size of LCD monitor, as well as the in-flight meal service. For the First Class passengers, they will be offered with a selection of fresh fruit juices while waiting for the rest of the passengers to board. Shortly after takeoff, they will also be given a cardamom-flavored Arabic coffee and succulent dates. Another facility available for all passengers is the free baggage allowance. Guest Class passengers are entitled to carry one piece of baggage weighing 25 kg maximum. Meanwhile, the First Class and Business Class passengers can bring two pieces of baggage, each should not exceed the maximum weight of 25 kg. In addition to that, Guest Class passengers get to bring a cabin baggage with maximum weight of 7 kg and maximum dimension of 115 cm. This also applies to the Business and First Class passengers. They are allowed to carry a bag or handbag (maximum 115 cm) and a documents briefcase (maximum 100 cm). The total weight of both pieces cannot be exceeded 9 kg. All checked baggage must be dropped at the check-in counter. For the domestic routes, check-in will be closed 45 minutes prior to the scheduled flight, while the departure gates will be closed 15 minutes before the departure. For the international routes, check-in will be closed one hour prior to the scheduled flight, while the departure gates will be closed 20 minutes before the departure. In all cases, passengers on domestic flights must be at the airport two hours prior to the scheduled departure, and passengers on international flights must be at the airport three hours before the plane takes off. When checking in, Alfursan members may present their membership card. Alfursan is Saudi Arabian Airlines’ frequent flyer program. Members of Alfursan can earn miles when they fly with Saudi Arabian Airlines or SkyTeam partners. Accumulates miles can be redeemed for a range of benefits and rewards that include free tickets and upgrades, global lounge access, additional baggage allowance, and priority wait-listing. There are three tiers of Alfursan membership, which are Blue, Silver (SkyTeam Elite), and Gold (SkyTeam Elite Plus).

Here’s how you can book your Saudi Arabian Airlines ticket online:

Payment for your Saudi Arabian Airlines ticket can be made via credit card, internet banking, and Cash at Counter. For complete information about payment methods, please visit How to Pay.