Pay upon Check-in
"The capital of the Southern Philippines is a city with a lot of stories to tell. Head to Cebu Heritage Monument to learn about its rich history or step inside the 1830 Jesuit House to travel back in time. The oldest Catholic Church in the country, Basilica del Santo Nino, is also located here. Feeling adventurous? Ride the Edge Coaster in The Crown Regency Hotel, which circles the perimeter of the 38th floor."

Other Accommodations in Cebu City

Other star hotels in Cebu City

Other hotels in Cebu City

8.5
Impressive
21,712 reviews from hotels in Cebu City with aggregated rating of 8.5/10.
Review from various users that have stayed in Cebu City will help you to choose the perfext hotel easily!
Ledaymae A. G.
Uncle Tom's Cabin Hotel

Michael
This is a private profile
Mayflower Inn

9.7
/ 10
9.7
2 Mar 2020
Extended my stay. I really like staying here because it's peaceful and quiet. You get to relax and get things done. Looking forward to many more days staying here. Received a complimentary mug. Thanks. I really liked it.
DA
Demz A.
Allson's Inn

9.7
/ 10
9.7
17 Dec 2019
Room is clean. Staff are all friendly. The pool is a jacuzzi type but still a good place to cool one’s body. Breakfast is yummy though not a lot of choices. Overall I had a happy stay and I will book here again soon.
Joanpauline A. S.
Sugbutel Family Hotel

9.1
/ 10
9.1
8 Jun 2021
The hotel staff is very courteous and friendly. Overall we had a very nice stay at the hotel. I would like to suggest putting on some white light bulbs because some people prefer to have them. And also bidet or provide a dipper (tabo). Thank you.
CM
Christian M.
Pillows Hotel Cebu

9.7
/ 10
9.7
20 Mar 2020
The staff were really nice, warm and were always smiling. The room I stayed in was big and spacious. The mattresses were very comfortable, and the pillows were indeed fluffy. Kudos to the staff of Pillows Hotel. The next time I come to Cebu, I'll definitely stay again in Pillows Hotel.
GS
Gou S.
Dynasty Tourist Inn

What are the best areas to visit in Cebu City?

What are the most popular landmarks in Cebu City?

How many hotels are listed in Cebu City?

Currently, there are around 397 hotels that you can book in Cebu City

Other star hotels in Cebu City

Other hotels in Cebu City 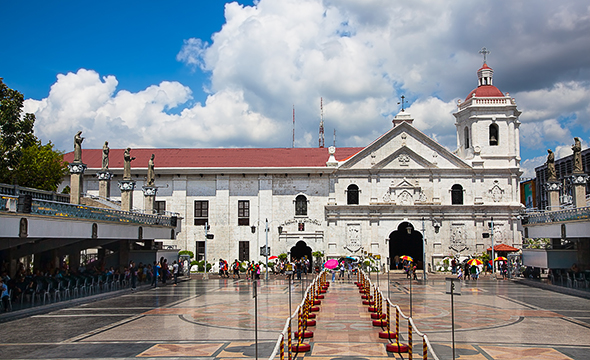 Cebu City, the charming and chaotic Queen City of the South is rich in history and culture yet features a cosmopolitan lifestyle similar to that of Metro Manila. It may be considered as one of the country’s fastest growing areas for commercial, trade, educational and industrial centers, but Cebu City still harmoniously blends with vibrant festivities and highland hideaways.

Tourist magnet Cebu City is the oldest city in the Philippines. The country’s first capital,this is where the Spaniards first settled after Ferdinand Magellan landed at the nearby Mactan Island in 1521, making it the fount of Christianity in the Far East. Eventually, it became a jump-off point to the whole archipelago for the Conquistadors then and for the foreign investors at present. It’s also synonymous with Sinulog, the grandest religious and commemorative festival in the country. Just like how you can’t get enough of its world-class famous Lechon, you won’t fall short of amazing places to see and travel-worthy experiences.

From Manila, there are many daily flights, both local and international to Mactan International Airport in Lapu Lapu City. Once you arrive, just take a cab to the city center, which would take you at least an hour depending on the time and traffic.

Cebu City's domestic port is the country's busiest where it’s home to almost 80 percent of the country's passenger vessels. Commercial ferry lines like 2GO have scheduled trips from Manila to Cebu City.

The main modes of transportation in Cebu City are jeepneys, taxis and buses. The jeepney and multicabs in Cebu are generally small, so if you have a large backpack or luggage, a taxi is much preferred instead. For short rides to and from the airport, Grab ride-sharing app is popular and convenient; the more scenic transpo alternative is through Cebu-Mactan ferry. Tricycles and Habal-habal (motorbike taxis) are limited only to the city. 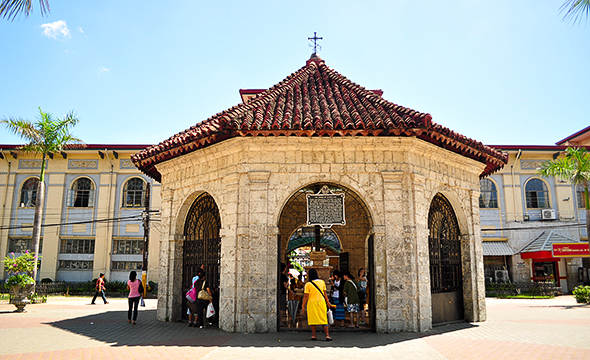 Cebu City is one of the most visited tourist cities in the country. True to its claim, it’s dotted with must-see attractions and destinations not to be missed. One of the well-known historic sites in the city is Fort San Pedro. Built as a wooden fort around 1565, it is now a museum and an open-air theater. If you want to see the panoramic view of Cebu City, Tops Lookout is your go-to place.

Make sure that Colon Street, the oldest street in the Philippines named after Christopher Columbus, and Magellan’s Cross, one of the most recognizable symbols of Cebu City, are in your checklist to visit. Take note that the wooden cross you’ll be seeing is not the real one but serves as a protective shelf of the original cross. 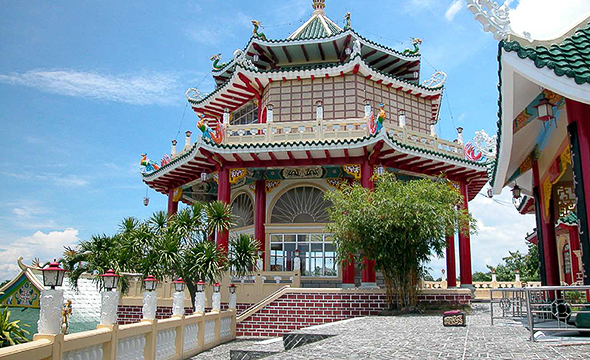 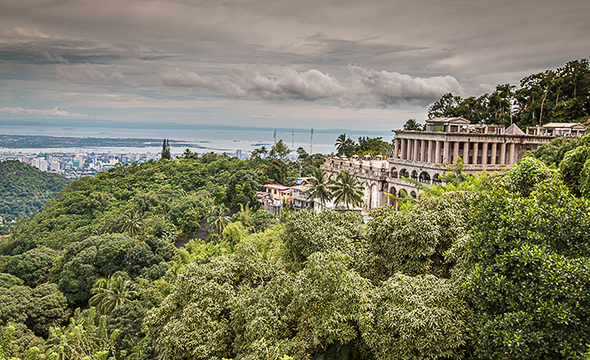 Marvel at the interesting and picturesque architectures and tranquil vibe of sacred sites like Taoist Temple and Temple of Leah.

Cebu is easily one of the favorite travel destinations in the Philippines both for locals and foreigners. Most visitors would rather head out to the beautiful beaches in nearby towns. But only those who came, will see, and conquered what the city has to offer. 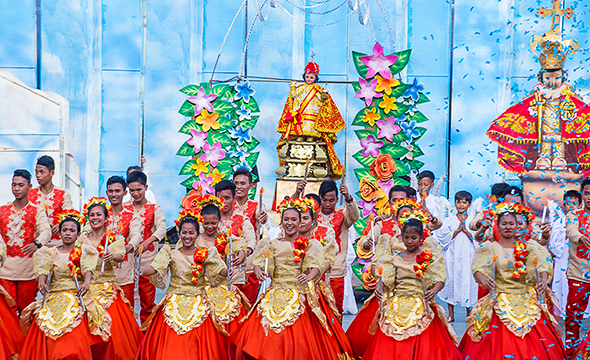 Witness the grand Sinulog festival with all its splendid parades, fireworks display, and performance shows. Do a walking tour of the old Cebu and discover the city’s history with historic museum and ancestral houses. 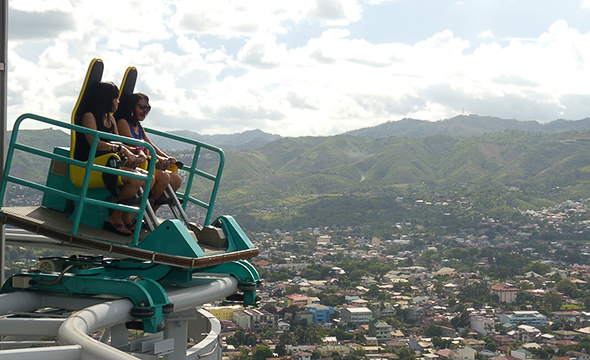 For the thrill-seekers and edgy adventurers, level-up your game at Crown Regency’s Sky Walk Extreme and Edge Coaster or outdoor activities at the Adventure Cafe; take a relaxing Python Spa treatment at the Cebu City Zoo.

For a more local shopping and pasalubong buying, stop by at Colon Street, Taboan Public Market and Shamrock.

The food scene in Cebu City is nothing short of a world class quality. This gastronomic hub is dubbed as the Lechon Capital of the World. Rico’s Lechon is a good place to start trying Da Best Gyud lechon in town. It’s so flavorful that you don’t need gravy or sarsa for your lechon.

More than a treat to your taste buds with its Filipino dishes, you’ll enjoy a panoramic view atop a mountain at Lantaw Floating Native Restaurant. No colonel or happy bee reigns over Sunburst Fried Chicken is the go-to place for generous serving of tasty fried chicken and coleslaw tandem in the city. Can’t get enough of unli rice and Filipino cuisine? Head on to Hukad Golden Cowrie.

For foodie adventurers, Larsian Barbecue is the hotspot for hawker-style grilled delicacies and street food.

Cebu City’s nightlife is pretty straightforward. The district houses from posh and elite night spots to middle-low class party zone with a dozen of bars and clubs lined up next to each other.

All the buzz about Z Bar is true - it’s one of Cebu City’s, if not the country, most stylish and elegantly designed bar and restaurant. Its interior was designed by none other than THE world renowned Kenneth Cobonpue. The Distillery brings home the premium beers, whiskies, and spirits from all over the world. This is the place for good time and great music as ten of the city’s finest DJ play an array of grooviest musical genres.

Mango Square in Mango Avenue is another popular nightlife venue in the city with lots of pubs and bars. A few minutes drive away is the Crossroads where you’ll find alternatives for upscale nightlife –VuDu, a dressy party club and Maya, a Mexican-inspired resto-bar and Family KTV.

Cebu City has a variety of accommodation options for travelers. Choose among the budget friendly hotels like In and Go Hostel, Uncle Tom’s Cabin Hotel and Sugbutel Family Hotel. If you can stretch your budget a bit more, you may opt to book in Quest Hotel or Golden Peak Hotel and Suites.

Other Popular Hotels in Cebu City