Pay upon Check-in
"Lapu-Lapu is a highly urbanized city located in the Province of Cebu. Some of the main tourist spots here include The Jungle Restaurant, which features Filipino cultural dances and the Lapu-Lapu Shrine. It also has several islands that you can explore including the beautiful islands of Olanggo and Caohagan Island."

Other Accommodations in Lapu-Lapu City

Other star hotels in Lapu-Lapu City

Other hotels in Lapu-Lapu City

Matumbo Road, Pusok, Lapu-Lapu City, Mactan Island, Cebu, Philippines, 6015
With a stay at Park Hill Hotel in Lapu Lapu (Mactan Island), you'll be minutes from Mactan Marina Mall and close to Cebu Yacht Club. This hotel is within close proximity of Marcelo Fernan Bridge and Our Lady of the Rule Church.

Talima Fish Sancturay, Olango Island, Lapu-Lapu City, Cebu, Philippines, 6015
When you stay at Talima Beach Villas and Dive Resort in Olango Island, you'll be on the waterfront and within the vicinity of Olango Wildlife Observation Deck and Magellan's Marker. This beach resort is within the vicinity of Magellan Shrine and Gaisano Grand Mall Mactan.
See Prices
See Prices

4.5
/ 10
4.5
19 Jan 2020
Bad hotel, did not explain to guess upon check in that daily clean up the room only based on request. No free drinking water in room, small bathroom and not maintained clean. Low quality breakfast
MA
Mark A.
Anthurium Inn

5.8
/ 10
5.8
21 Sep 2021
The room had a bad smell, dirty CR with lots of mosquitos, poor WiFi and no TV services. It looked like the room hadn't been used in a long time. The restaurant was also closed and there was no means to get a warm drink.
QA
Queeny A.
San's Inn Mactan

5.1
/ 10
5.1
16 Mar 2020
It was absolutely the worst experience ever. No wifi, no refrigerator, the toilet did not flush and there was no breakfast. Not a good value for the money.
JA
Judy A. P.
โรงแรมพาร์คฮิลล์

6.3
/ 10
6.3
22 Jul 2019
It’s really near the airport but the building needs a lot of improvement. The cr has no pail, although the shower’s fine, there’s no proper rug, amidst the rainy weather. The room lighting was dim and the tv is a bit old. My stay was fine and there are a lot of food choices after walking a few meters from the inn.
PA
Pamfi A.
GV Hotel Lapu-Lapu

6.1
/ 10
6.1
21 Feb 2020
Internet connection is very slow in upper floors because no routers available on each floor. No elevators, no hot and cold shower.

What are the best areas to visit in Lapu-Lapu City?

What are the most popular landmarks in Lapu-Lapu City?

How many hotels are listed in Lapu-Lapu City?

Currently, there are around 210 hotels that you can book in Lapu-Lapu City

Other star hotels in Lapu-Lapu City

Other hotels in Lapu-Lapu City 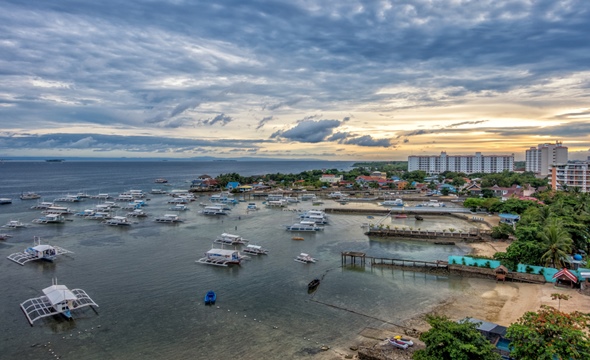 The City of Lapu-Lapu is one of the cities that make up Metropolitan Cebu, a highly-urbanized region south of the Philippines. The city is also home to the famous Mactan Island, which is the very location of the second most busiest airport in the Philippines, the Mactan-Cebu International Airport 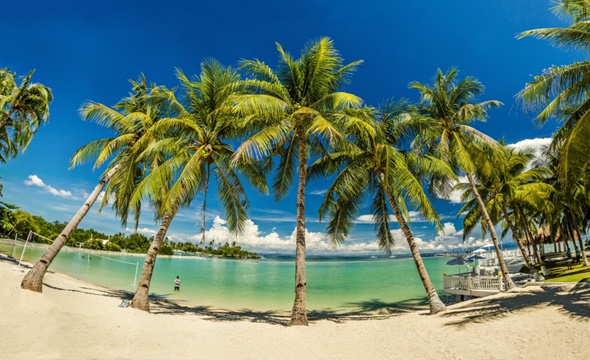 Although the topography of the area is mostly flat with several rivers and creeks, travelers looking for some vitamin sea can look forward to exploring the city’s beaches, which houses a thriving marine life and numerous corals. It can get a bit warm, especially during the summer months, as temperature on a normal day ranges from 65 to 95 degrees Fahrenheit.

You can take a direct flight to Cebu if you’ll be coming from either Singapore, Hong Kong, South Korea, Japan, Taiwan and Russia. The airport island is connected to Lapu-Lapu and mainland Cebu via Marcelo Fernan Bridge and Mactan-Mandaue Bridge.

You would need to travel to Manila in order to take a boat or ferry at the Manila Port to mainland Cebu. Travel time usually takes a little over a day, and will land at the Cebu City port. You would have to take a cab/car or commute via jeepney to go to Lapu-Lapu City.

Taking a bus to Cebu is not impossible, but will be a bit inconvenient due to the many transfers. If you have a car, you can take advantage of the Roll-on/roll-off (RORO) ships who travel to Cebu City. You can also ask the Philippine Port Authority for buses that offer rides to Cebu via RORO.

Commute your way around Lapu-Lapu City via a tricycle (a sidecar attached to a motorcycle) or a multicab (small jeepney). They mostly cover all routes in the city, so this would be your preferred affordable mode of transport. Fare rate is minimum, but it can go up if your trips are a bit far.

If you like to be comfortable, you can flag down a taxi cab, or hire the cab driver to drive you around at an agreed price. Do, however, try to haggle the price and be prepared to walk away if it’s too expensive. You can also hire a car service from the airport as well. 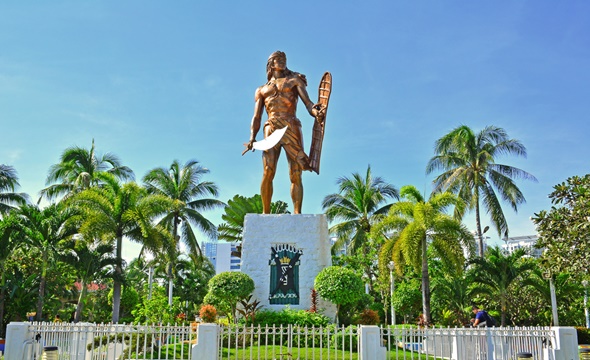 Your travel to Lapu-Lapu City will not count if you miss visiting the shrine dedicated to Cebu’s most celebrated hero: Chief Lapu-Lapu. The Lapu-Lapu Shrine in Punta Engaño, Mactan Island is majestic at 20 meters tall made out of bronze. 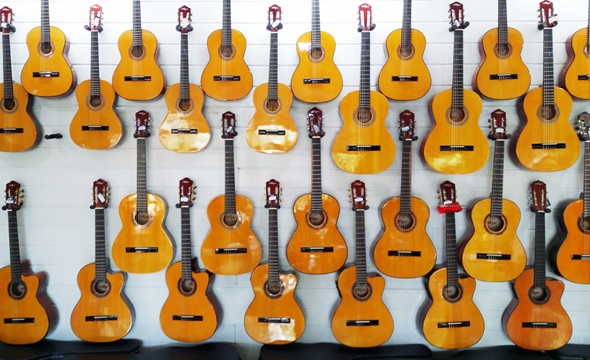 If you’re a music aficionado, you’d probably have the time of your life picking up a new guitar along the National Highway in Barangay Pajac. Guitars sold there are proudly handmade. If you like taking artistic photos for your travel diary, the boardwalk in Olango and the Marcelo B. Fernan Bridge in Mactan would be your perfect subjects for scenery shots.

Although the land area of Lapu-Lapu City is smaller than its neighbor, Cebu City, it packs a lot of surprises that are worth remembering. On a good day, get a 360 view of the entire Mactan Island on a balloon ride only offered at Hadsan Beach resort in Barangay Agus.

You can also explore the Pawod Spring Underwater Cave (PUWCS), which is also at Barangay Agus. You’d have to be alert at all times though, as you might get a chance encounter with the local mantaka (giant octopus) who made the cave home. You can also jump on a boat ride at Muelle Osmena and take the scenic route via the Mactan channel going to Cebu City.

Lapu-Lapu City, and almost every city making up Metro Cebu, are peppered with restaurants that offer All-You-Can-Eat buffets starting at Php99. But if you like to dine in with a show, head to the Jungle Cultural Entertainment Center in located along the National Highway. The restaurant entertains its customers dining on Filipino or international cuisine with Filipino cultural dances such as Subli, Salip, Palok, Liwa Liwa, Fan Dance, Tinikling and the Sinulog. 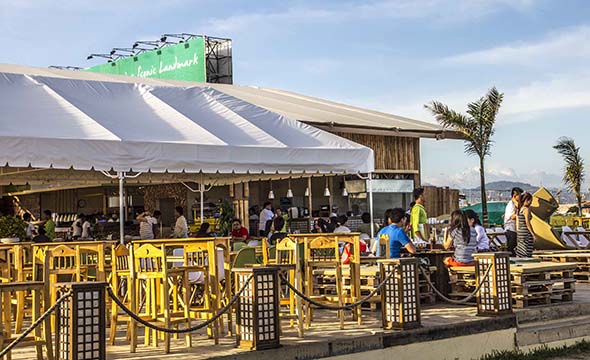 Get your seafood cravings satisfied at Lantaw Floating Restaurant, which is located at Day-as Cordova. Seafood, along with the other items on the menu, are given the island local flavor treatment. You can have your fresh seafood Sutukil, or Su (Sugba or grill), Tu (Tula or stew) and Kil (Kilaw or raw).

Head out to Chicago Joe’s Beachside Bar & Bump for live music and a state-of-the-art Lights and Sounds system to play dance music. Located in Pusok, near the Marina Mall, Magellan’s Landing is also a good option, as it is a small, nice type of bar. The bar has a live band every Friday, and risk takers can gamely ask the in-house band for song requests or greetings.

The Amazing Show at Hadsan Cove, which is a performance showcase featuring all gay dancers, is also a sight to behold. But if you’re staying at a hotel, you can ask the concierge if they do have group gatherings in meals so you can have full conversations. 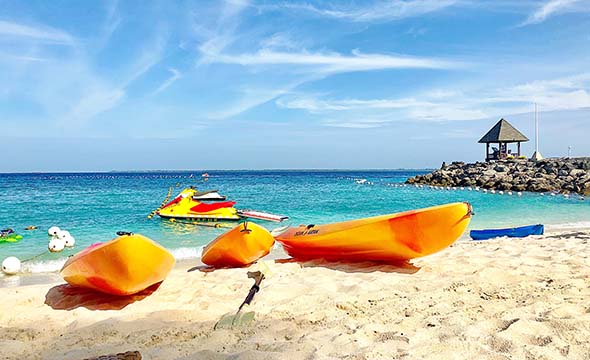 Lapu-Lapu City has a lot of luxury hotels and/or resorts, so you have the power to pick Waterfront Airport Hotel and Casino, Shangri-la Mactan Resort & Spa, Moevenpick Hotel, and Plantation Bay Resort and Spa.

But if you like something more comfortable at a much lower price, you can go with Cebu Guest House, Express, Cebuview Tourist Inn, or Tr3ats Guesthouse. Rental price per night can go as low as Php300.

Other Popular Hotels in Lapu-Lapu City