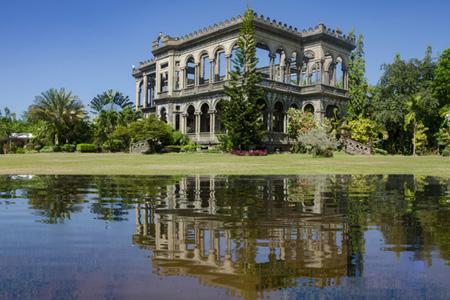 Bacolod, is in the city in the Philippines. It is the most populous city in the Western Visayas. Bacolod is also the second most populous city in the Visayas after Cebu City. Bacolod also the centre of the Bacolod Metropolitan Area which includes Silay and Talisay city. Together with the other two cities, Bacolod has a population of 791,091 people which covers an area of 578.65 sq. kilometers. Bacolod is well known for its Maskara Festival. Maskara Festival is a festival held during the third week of October. Bacolod city has a nickname "The City of Smiles" because it is a friendly city. Among famous delicacies of Bacolod are the piaya and chicken inasal. In 2008, MoneySense Magazine said that Bacolod is the best place to live in the Philippines. Bacolod also been declared as “centre of excellence” by the Department of Science and Technology for its information technology and business process management operations. The Manila Times awarded Bacolod city as the “Top Philippine Model City” in 2017.

How to Get Cheap Flights to Bacolod

Traveloka is a travel search engine that makes it easy for travellers to find the cheapest flights to Bacolod. All you need to do is key in the information in the search box, and the application will recommend the best trip according to your budget. It compares flight prices across some trusted airlines to help you to get the best possible deal. Use Traveloka’s price alert feature to be notified of flights in your desired price range to get the best flight price to Bacolod.

When is the Best Time to Fly to Bacolod?

Best time to Visit is during October. The temperature and weather in that month are very suitable for outdoor and sightseeing activities. However, hotel and flight fares will be much more expensive than the other months.

Bacolod has a temperature of 23 °C to 32 °C throughout the year. April and May are the hottest months in Bacolod. You can also visit Bacolod when the locals are celebrating the Maskara Festival. It is a colourful fiesta with a parade of smiling masks.

What are the Top 3 Things to Do in Bacolod?

1. The Ruins – it is one of the landmarks in Bacolod. The Ruins is the remains of the ancestral home mansion for the family of Don Mariano Ledesma Lacson and Maria Braga Lacson. The ruins are situated in the Talisay, Negores Occidental, Philippines. The architecture is very beautiful. The ruins also are known as the "Taj Mahal of Talisay” or “Taj Mahal of the Philippines”. Currently, it served as a tourist attraction. There is no entrance fee to the ruins.

2. San Sebastian Cathedral – it is located in the Rizal Street, Bacolod City. It first opens on January 20, 1882. It has a baroque architecture. It is a late 19th-century church located in Bacolod City, Negros Occidental in the Philippines.

We are partnering with the most reliable payment service providers to make sure every transaction is smooth and worry-free!
Getting To and From the Airport
Finding a ride to or from the airport in Bacolod can be a challenge. Luckily, now you can book your airport transport in advance with the Traveloka app. Partnering only with trusted transportation providers, we ensure your airport trip to be worry-free. Take a look at our various transport options and find one that best suits your needs.