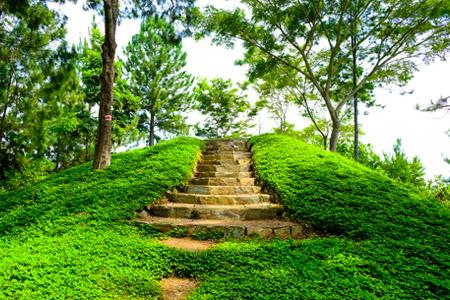 Cagayan de Oro or officially known as the city of Cagayan de Oro is another first-class urbanized city which can be found in Northern Mindanao of Philippines, being a chartered city and capital of Misamis Oriental province. Being the regional center as well as a business hub of Northern Mindanao and part of the Metropolitan Cagayan de Oro area, its economy is mainly driven by industry, commerce, trade, service and tourism. The city is also home to North Mindanao Import Facility (NMIF), a multi-billion peso fuel import facility owned by Pilipinas Shell Petroleum Corporation. Historically the city name, Cagayan de Oro can be traced to the arrival of Spanish Augustinian Recollect way back in 1622, in which the early Spanish documents were making references to Cagayan area. With a total population of 675,950 residents as of 2015 which makes Cagayan de Oro the tenth most populous city in the Philippines, Cagayan de Oro is subdivided into 80 barangays grouped into two congressional districts.

Laguindingan Airport is the primary airport meant to serve the cities of Cagayan de Oro and Iligan, in addition to the regions of Misamis Oriental, Lanao del Norte and Bukidnon. Sitting on a 4.17 square kilometers site in Barangay Moog which is about 46 kilometers from Cagayan de Oro and 57 kilometers from Iligan, it is the six busiest airports in the country. It is a public airport operated by the Civil Aviation Authority of the Philippines, being classified as a Principal Domestic Airport Class I. Opens since 2013 to replace Lumia Airport, the airport is now able to accommodate up to around two million passengers annually. At an elevation of 58 meters, the runway is 2,100 meters long and is made of concrete. It is the hub for Cebu Pacific and Philippines AirAsia as well as catering to Philippine Airlines and Royal Air for flights heading to and from Manila, Clark, Cebu and many more.

How to Get Cheap Flights to Cagayan de Oro?

Traveloka is a travel search engine that makes it easy for travelers to find the cheapest flights to Cagayan de Oro.All you need to do is to key in the information in the search box, and the application will recommend the best trip according to your budget. It compares flight prices across some trusted airlines to help you to get the best possible deal. Don’t hesitate to use Traveloka’s price alert feature to be notified of flights in your desired price range to get the best flight price to Cagayan de Oro.

When is the Best Time to Fly to Cagayan de Oro?

The off-peak season is in December which is the least humid month in Cagayan de Oro. As such, one can expect travel costs to be much lesser if you are travelling around this month. The peak time to visit Cagayan de Oro is usually around May, as well as July to August, therefore expect prices of flight tickets as well as accommodations to go on rise around this time. If you plan your trip well, you can undoubtedly save your finance because the price for hotels and flights during peak season will cost you a lot of money.

Cagayan de Oro, in a similar fashion to other regions around the Philippines and nearby countries in the Southeast Asia region, is said to have a tropical rainforest climate which dry season is shorter or almost negligible, and rainfall is normally heavy throughout the year with at least 60 millimeters of rainfall every month of the year. The average maximum temperature in Cagayan de Oro around 30 and 34 degree Celsius while the average minimum is around 17 and 19 degree Celsius. The hottest months are usually around April, May and June. Cagayan de Oro too has a high humidity with some months being more humid than others.

Being a well-developed city with good economy, Cagayan de Oro is one of the cities in the Philippines with a rich setup and culture. Therefore when you are in Cagayan de Oro, you can look forward to participating in the events and festivals organized just like a local would. The highly expected festival in Cagayan de Oro city would be the Higalaay Festival which is held annually on 28th of August to celebrate the feast day of St. Augustine which is the city's patron saint. The multitude of events will be organized throughout August in conjunction with this particular festival such as Kumbira Culinary Show, Cagayan de Oro Carnival Parade, Higalas Parade of Floats and Icons and many more.

What are the Top 3 Things to Do in Cagayan de Oro?

With tourism being included as one of the major contributors to its economy, Cagayan de Oro surely has a lot to offer to the guests and tourists in terms of attractions that are worthwhile visiting, be it natural or man-made attractions.

1. Limketkai Center – Known among the locals as Ketkai, the Limketkai Center is a shopping center in Cagayan de Oro developed by Limketkai Sons Inc. which is the largest factory and business district developer in town. The two-story mall has over 500 tenants comprising of boutique shops, fast-food chains, restaurants, spas, clinics, day-care centers, movie theatres and more.

2. Gaston Park – Located near the St. Augustine Cathedral and the Archbishop’s Palace, Gaston Park was once the main plaza used during the Spanish colonial period. In the present, it is now a Philippine-American War historical site with a National Historical Institute marker placed here.

We are partnering with the most reliable payment service providers to make sure every transaction is smooth and worry-free!
Getting To and From the Airport
Finding a ride to or from the airport in Cagayan de Oro can be a challenge. Luckily, now you can book your airport transport in advance with the Traveloka app. Partnering only with trusted transportation providers, we ensure your airport trip to be worry-free. Take a look at our various transport options and find one that best suits your needs.